This seems to be a thing now, posting every second week, and it’ll probably stick because life is hectic ;P

As always, WWW Wednesday is a wonderful opportunity to delight in discovering what other people have read, are reading or will be reading. Because our TBRs are in need of it, right? 😅

Thanks to the lovely Sam at Taking on a World of Words for hosting this amazing blog hop every week! If you aren’t following her already, you’re missing out 🙂

Want to join in? All you have to do is answer these questions:

A Gathering of Shadows (Shades of Magic #2) by V.E. Schwab

Blurb (from A Darker Shade of Magic, the first book)

Kell is one of the last travelers–magicians with a rare, coveted ability to travel between parallel universes connected by one magical city.

There’s Grey London, dirty and boring, without any magic, and with one mad King–George III. Red London, where life and magic are revered–and where Kell was raised alongside Rhy Maresh, the roguish heir to a flourishing empire. White London–a place where people fight to control magic and the magic fights back, draining the city to its very bones. And once upon a time, there was Black London. But no one speaks of that now.

Officially, Kell is the Red traveler, ambassador of the Maresh empire, carrying the monthly correspondences between the royals of each London. Unofficially, Kell is a smuggler, servicing people willing to pay for even the smallest glimpses of a world they’ll never see. It’s a defiant hobby with dangerous consequences, which Kell is now seeing firsthand.

Fleeing into Grey London, Kell runs into Delilah Bard, a cut-purse with lofty aspirations. She robs him, saves him from a deadly enemy, and finally forces Kell to spirit her to another world for a proper adventure.

Now perilous magic is afoot, and treachery lurks at every turn. To save all of the worlds, they’ll first need to stay alive.

I have been putting this one off because I wanted to read it close enough to A Conjuring of Light‘s release date. Since that is LESS THAN A WEEK AWAY!!!! now seems like a good time to start on this one 💖

UPDATE: Only 40 pages in and I am already in love. There are pirates!!!

Game of Shadows by Erika  Lewis 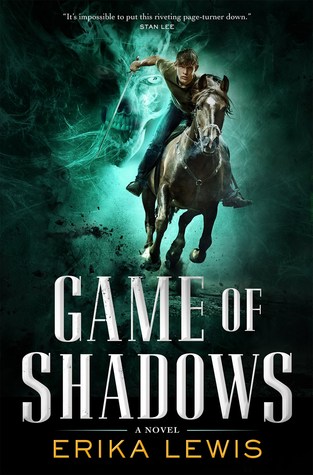 Definitely a new fantasy series to look out for. I was fortunate to receive an ARC from NetGalley and really devoured this one. Reminded me of Percy Jackson and The Mortal Instruments with a Celtic twist. And the mythology really was the best part! My review for it will be up next week in anticipation of its release February 28th! 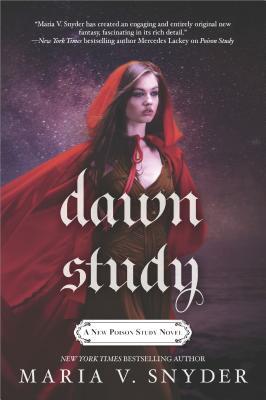 Blurb (from Poison Study, first book in the series):

About to be executed for murder, Yelena is offered an extraordinary reprieve. She’ll eat the best meals, have rooms in the palace—and risk assassination by anyone trying to kill the Commander of Ixia.

And so Yelena chooses to become a food taster. But the chief of security, leaving nothing to chance, deliberately feeds her Butterfly’s Dust—and only by appearing for her daily antidote will she delay an agonizing death from the poison.

As Yelena tries to escape her new dilemma, disasters keep mounting. Rebels plot to seize Ixia and Yelena develops magical powers she can’t control. Her life is threatened again and choices must be made. But this time the outcomes aren’t so clear…

Well, that brings this series to an end. I’ve enjoyed the ride and especially certain character arcs. While I was glad to follow this series to its end, I hate to admit that I wasn’t completely sold on this extended trilogy in the Poison Study universe, if only because a lot of the conflict and conversations became repetitive over times and Yelena’s character seemed to fall to the background too often. I think I’ll review this and Night Study together as they really lead one into the other.

A Second Chance at Life by Kassandra Lynn 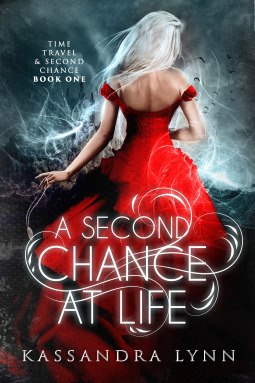 Lady Elaina had everything—wealth, title, and irresistible beauty—until her jealous half-sister ruined her reputation and forced her into a disgraceful marriage. She died amidst the flames, murdered and betrayed by her husband and half-sister. As the flames roared, the loss of her unborn child created a thirst for revenge.

A magical amulet sent her two years back in time. She has another chance to make things right for herself and her family, yet what began as a plot to undermine her half-sister’s machinations quickly evolved into a political conspiracy that will rock the entire empire and make Elaina realize she might not have traveled back in time alone.

This is another NetGalley arc and I had such difficulty getting through it. To be honest, it’s not the kind of story I tend to go for, but I was intrigued by the premise and thought it might be a nice change of pace. But the dialogue was terribly stilted and the characters unlikable as a whole. What was most difficult for me though was the unrealistic worldbuilding. I put up a review on GoodReads and I will say that others have more positively received it. It might just be me then and so, while I won’t recommend it, I will advise that I am also not one for romance heavy plots with no other substance, so that’s a bias to take into account.

In Calabria by Peter S. Beagle 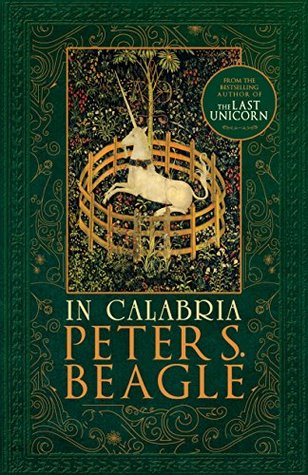 From the acclaimed author of The Last Unicorn comes a new, exquisitely-told unicorn fable for the modern age.

Claudio Bianchi has lived alone for many years on a hillside in Southern Italy’s scenic Calabria. Set in his ways and suspicious of outsiders, Claudio has always resisted change, preferring farming and writing poetry. But one chilly morning, as though from a dream, an impossible visitor appears at the farm. When Claudio comes to her aid, an act of kindness throws his world into chaos. Suddenly he must stave off inquisitive onlookers, invasive media, and even more sinister influences.

Lyrical, gripping, and wise, In Calabria confirms Peter S. Beagle’s continuing legacy as one of fantasy’s most legendary authors.

This is reminding me that I’ve read more NetGalley ARCs then physical books. I do not like this statistic ;P
In Calabria is my second Peter S. Beagle book and so far my favourite (I haven’t read The Last Unicorn yet though, so…). I fast tracked the review because it releases today in the UK! So happy book birthday! A five star review from me. You can find it here!
Isle of Winds (The Changeling #1) by James Fahy 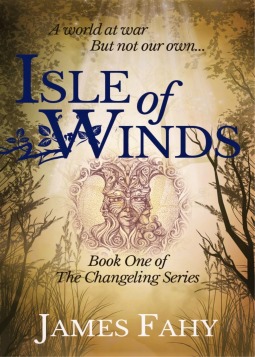 Robin Fellows lives with his grandmother and lives what appears to be a rather ordinary life for a normal twelve year old boy.

But when Robin’s Gran dies, quite suddenly and a bit mysteriously, his world is turned upside down. A long lost relative comes out of the woodwork and whisks him away to a mysterious new home, Erlking Hall, a quiet estate in the solitary countryside of Lancashire.

Suddenly Robin must adjust to his new reality. But reality is no longer what he thought it was…

Erlking has many secrets – as do his newly found Great-Aunt Irene and her servants. After a strange encounter on the train and meeting a cold, eerie man on the platform, Robin begins to notice odd happenings at Erlking.

Robin is the world’s last Changeling. He is descended from a mystic race of Fae-people, whose homeland, the Netherworlde, is caught in the throes of a terrible civil war.

Not only this, but in this new world there is a magical force that has infiltrated the human realm.

Before he can wrench power from the malevolent hands of the Netherworlde’s fearsome tyrant leader, Lady Eris, he must first search for the truth about himself and the ethereal Towers of Arcania.

The first instalment of The Changeling Series, Isle of Winds is an engrossing tale written in the traditions of high fantasy story-telling while carving out a magical new realm. It is perfect for fans of The Lord of the Rings and the Harry Potter series.

Just finished this one last night and it was W – O – N – D – E – R – F -U – L! A brilliant fantasy adventure that fits in beautifully with classics like Chronicles of Narnia and The Hobbit! Seriously friends. Read this one! My review should be up soon!

But also… I know that I won’t get through my February TBR. It was ambitious to begin with, but I am trying to get through these before the month through… 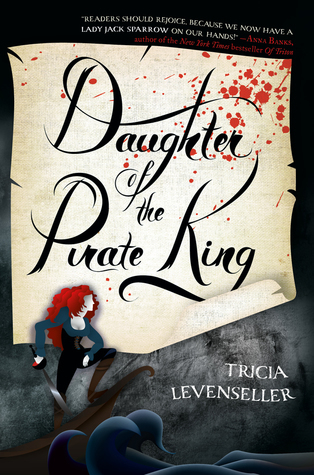 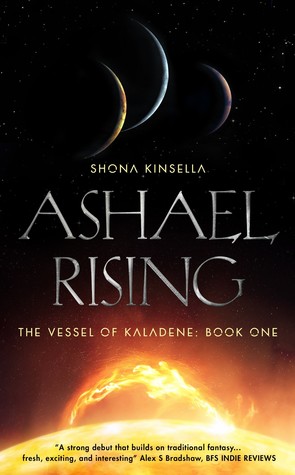 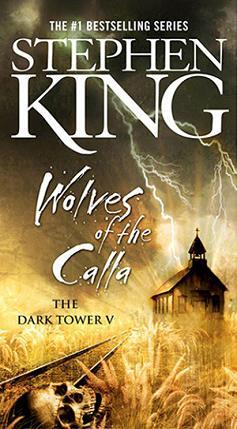 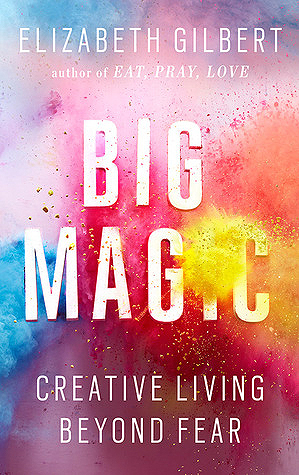 Let me know what you’re reading or have read or plan on reading next or share a link to your post.