Still behind on reviews, but we’ll get there!

Thank you to NetGalley and Tachyon Publications for providing me with an ARC in exchange for an honest review! 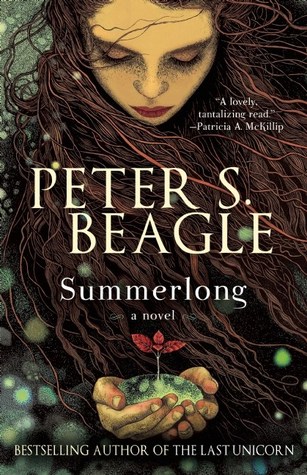 Retired history professor Abe Aronson is a cranky, solitary man living out his autumn years on Gardner Island, a ferry ride away from the hustle and bustle of nearby Seattle. One rainy February night, while dining at a favorite local haunt, Abe and his girlfriend Joanna meet an engaging enigmatic waitress, new in town and without a place of her own. Fascinated and moved by the girl’s plight, Joanna invites her to stay in Abe’s garage. It seems everyone falls for the charming and invigorating the waitress, but she is much more than she appears, and an ancient covenant made a millennium ago threatens to disrupt the spring and alter the lives of Abe, Joanna, and all those around them forever..

Peter S. Beagle, renowned for The Last Unicorn, crafts a story reminiscent of Neil Gaiman, blending reality and whimsy into a stirring narrative about family and the bonds we form. Abe and Joanna are our protagonists, characters in the later years of their life, who have been together for a long time but are not married. Their mundane, every day lives are changed for the better when they meet Lioness, a beautiful young girl who seems to be on the run from something. Or someone.

The premise initially drew my interest and once the story was started, I was hooked. The plot is not one that develops at a quick pace, and in fact is slow going until the midpoint, which might be a turn off for some people. I enjoyed it well enough, loving the lyrical prose that Beagle wielded as he brings to light the truth of Lioness’s past and explores the way in which Abe and Joanna are called to reexamine their lives in the wake of this new presence.

One of the standout characters for me was Joanna’s daughter, Lily, who becomes smitten with Lioness to the point of utter devotion. She is an intriguing character and her relationship with her mother is one of the strengths of the novel. It’s unfortunate that there isn’t more focus on her. Overall, the characters slowly discover new truths about themselves and follow meaningful arcs that reach fulfilling, if not satisfying ends.

Lioness is of course the cornerstone of the story and the truth of her heritage is one that anyone with a grasp on mythology will quickly come to recognize. It’s frustrating that it takes Abe and Joanna as long as it does to discover it for themselves.

Though the slow pace might deter some people, there is something beautiful to be discovered in the subtext of this novel and its thematic resonance. At its heart, this is a story about relationships and explores how and why people form certain bonds.

An enchanting tale that weaves the mystical into every day life and a thought provoking tale.