It’s been awhile since I posted a review, but here comes a new one for you. 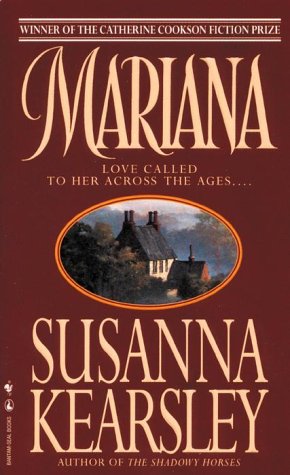 The winner of the Catherine Cookson Fiction Prize: this mesmerizing, suspenseful, atmospheric tale of time travel draws us into the heart of a heroine we won’t soon forget. The first time Julia Beckett saw Greywethers she was only five but she knew at once it was her house. Now twenty-five years later, by some strange chance, she has become the new owner of the sixteenth-century Wilshire farmhouse.

Julia begins to suspect more than coincidence has brought her. As if Greywethers were a porthal between worlds, she finds herself abruptly transported in time. Stepping into seventeenth-century England, Julia becomes Mariana: a beautiful young woman struggling against danger and treachery, battling a forbidden love for Richard de Mornay; handsome forebear of the squire of Crofton Hall. Each time Julia travels, she becomes more enthralled with the past, falling deeper in love… until one day she realizes Mariana’s life threatens to eclipse hers. She must find a way to lay the past to rest, or risk losing a chance for love in her own time.

“…seek me not with your eyes, but with your soul. The soul sees what truly matters.”

Set in the present, but defined by the echoing past, Mariana, is a historical romance that tells the story of a young artist beckoned to remember a past life, a time when she was Mariana.

This story was a reread for me, and I enjoyed it even more this time than the first. Perhaps it has something to do with how I’ve grown as a person since my last reading, but I’d rather claim it to be a recognition of the subtle foreshadowing layering the earlier chapters in preparation for the denouement.

“The past can teach us, nurture us, but it cannot sustain us. The essence of life is change, and we must move ever forward or the soul will wither and die.”

The plot is an enchanting one, exploring the life of one woman as she experiences two times, two lives, two realities. Julia may exist in the present, but the past is still very tangible for her and dangerously so, as it threatens to claim her present. The more she experiences of Mariana’s life, the more in danger she becomes of fading into it.

Julia’s story is a compelling one, an illustrator of children’s books, she is able to roam where she will and roams she does, to a house that first called her when she was a child.

“I first saw the house in the summer of my fifth birthday.”

Now, thirty and inquisitive, she moves into this home settled in the verdant British countryside where she makes new friends, falls in love, and seeks to understand why she keeps walking Mariana’s memories.

And yet, the more endearing story is Mariana’s. As a reader, I craved those moments when Julia trespasses into 17th century England. Mariana is a young woman who is forced to flee London at the outbreak of the plague that renders her an orphan. In her abusive uncle’s house, she becomes a prisoner of sorts, until fate introduces her to Richard de Mornay.

Friends, I usually am not one for romantic pieces, but this relationship is all my heart needed. To see their love blossom is one of the pure joys of this book:

His hand lifted higher, and clasped mine strongly. “Feel that, love. There’s nothing can break that. We are two parts of the one whole, you and I. The hawk mates for life, and our lives are but beginning.”

Of course, it’s not just the relationship that makes Mariana’s story more compelling. It is the character herself and the setting. I’m a bit of a history geek (proud of it), so my heart feels drawn to stories that are established in days of old. The world building is wonderfully vibrant, establishing the reader well into the time period and the political undercurrents that subtly affected Mariana’s rural world. And Mariana is a strong woman in a time when things weren’t easy for the ‘fairer sex’. Dauntless, yet compassionate, she is reminiscent of a heroine from one of Jane Austen’s novels.

The secondary characters round out the story nicely. From Geoffrey de Mornay (Julia’s love interest), to Thomas Beckett (Julia’s brother & a rather unconventional parson), to Iain Sumner (the Scottish gardener), to Vivien Wells (Julia’s friend and the owner of the local pub.), the ensemble is a brilliant cast with unique personalities and entertaining banter.

I want to give this book five stars, but it’s perfection is tempered by an abrupt ending that demands to be continued.

Still, this book is a cozy read. Enchanting and beautifully written and as Susanna’s second book, reveals only a glimmer of the narratives that she can tell!

A story about love transcending time and one woman’s journey to uncover a life once lived, Mariana is a gorgeously woven narrative that might just steal your heart.