It’s Monday, but instead of a weekly review for you, I have a bookly one 😉

It’s been forever since I posted my last book review and I’m really trying to start up the act again, not only because I love to share the books I’ve indulged in, but it’s a great way to support authors! So here we go.

I’m trying a new format with this (my third renewed attempt to be a blogging book reviewer). Chances are I’ll keep playing around with some ideas, but for now, let me know what you think! 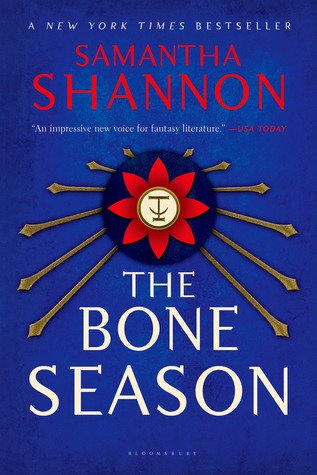 The Bone Season introduces a compelling heroine and also introduces an extraordinary young writer, with huge ambition and a teeming imagination. Samantha Shannon has created a bold new reality in this riveting debut.

Plot: There are many familiar elements in this narrative. The fierce female protagonist battling against a world trying to control her. A banterful and transformative relationship with a mentor. A dystopian future where one faction is persecuted because they possess a form of magic.

The presence of such elements isn’t inherently a bad thing. Most of the time, they’re what hook readers in. The familiar scenes are easy to fall into. The problem is when these elements aren’t allowed room to become something unique, something that is different. A lot of times, I felt that this was what really prevented The Bone Season from becoming a better novel.

That’s not to say that there was nothing original about it. There was, actually! The worldbuilding was impressive and the overall arc promises an intriguing series. The specific details were novel and diverting, but there was a generic undertone to them. I often found myself drawing comparison to The Hunger Games and Divergent series. In hindsight, this might have been one of the reasons for why I enjoyed it less. The book was marketed as “the new Harry Potter“. I went in expecting the like, but found a rather different novel instead…

Characters: Paige is the heroine of this tale. A voyant, she is captured early in the story’s narrative and taken to a world where she is seen as a commodity for the power she possesses. In this way, Paige mirrors a number of protagonists from bestselling YA Dystopian novels: Katniss, Tris, Alina, etc. She is special and that puts her in a dangerous position. As a character, she inhabits the same snark and ferocity of her fellow YA heroines, but there is still something refreshing about her. The most intriguing turn comes near the end and I won’t say more than that to avoid spoilers, but her backstory is one that reveals a mature grasp of the world and explains the characteristics she displays through the novel’s duration.

In terms of secondary characters, the supporting cast is quite impressive. From antagonists to allies, Shannon presents a vast array of distinct figures who manage to intrigue. Definitely a high point of the novel!

Style: What I tended to most enjoy about this book was Shannon’s prose and style of narrative. Every few chapters, she would intersperse within the chronological action, a dream of Paige’s that hearkens back to her journey before her capture. At first, a jarring disruption, the motivation behind it, once revealed, is most satisfying. The thoughtfulness that Shannon showed through it was a highlight more myself.

Conclusion: Though weighed down by endless exposition at the start and perhaps a bit confounding with all the terminology, the ending promises a strong follow-up worth discovering. Just be prepared to wait. A seven-book planned series, the question to ask yourself before you begin is: are you ready to commit?