Another happy Wednesday to you all 🙂

I hope you’re still going strong as we reach the middle of a rather hot week (at least here in Quebec).

Not surprisingly, WWW Wednesday is a weekly meme hosted by the brilliant Sam at Taking on a World of Words. If you haven’t discovered her blog yet, you should reconsider what you do after reading this post 😉

I’ve been rather productive with my reads, which makes me rather happy. I’ve already finished two books this month and I’ll be finished a third by tonight. Want to find out more? Read on…

I meant to start this one a while back, but I kept getting side-tracked. I picked it up two nights ago and I was completely swept away into Haven’s story. I nearly finished last night, but then the witching hour drew upon me and I had to cap myself off. I’m 85% of the way through (thank you Goodreads) and I’m itching to see how this wonderful story concludes. I’m excited to share my review for this one 🙂

Two of my favourite authors. Nothing could be better 🙂 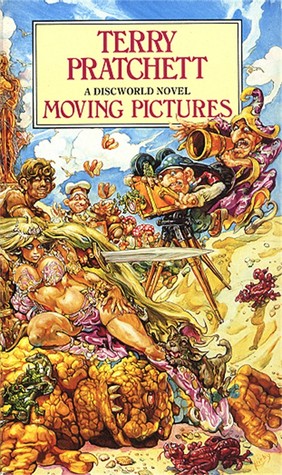 After Eric’s slightly underwhelming narrative, Moving Pictures was a delightful installment in the Discworld series. So much to love 🙂 Claire mentioned to me how she enjoyed this novel because of her love for movies and I think that my own enjoyment benefited from the same. As someone fascinated by the film industry, it was rather wonderful to see Pratchett parodize product placement, creative differences and the nature of stardom. He never fails to impress!

The Kindly Ones (Sandman Vol. 9) by Neil Gaiman:

They have had many names: The Erinyes. The Eumenides. The Dirae. The Furies. Agents of vengeance, implacable and unstoppable, they do not rest until the crime they seek to punish is washed clean with blood. It is to them, THE KINDLY ONES, that Lyta Hall turns when her baby Daniel is taken from her, and it is Dream of the Endless who becomes their target. But behind a mother’s grief and unyielding rage, there are darker forces at work, and what they set in motion will eventually demand a sacrifice greater than any the Dreaming has yet known.

Neil Gaiman does it again. A genius, a true master of blending myth with reality. This penultimate installment in the Sandman series was simply told and yet more affecting than some books I’ve read this year. If you haven’t yet discovered this brilliant graphic novel series, please take note. It is a real gem of literature!

Two young people are forced to make a stand in this thought-provoking look at racism and prejudice in an alternate society.

Sephy is a Cross — a member of the dark-skinned ruling class. Callum is a Nought — a “colourless” member of the underclass who were once slaves to the Crosses. The two have been friends since early childhood, but that’s as far as it can go. In their world, Noughts and Crosses simply don’t mix. Against a background of prejudice and distrust, intensely highlighted by violent terrorist activity, a romance builds between Sephy and Callum — a romance that is to lead both of them into terrible danger. Can they possibly find a way to be together?

This will actually be a re-read for me. It’s one I’ve been meaning to jump into for some time. I first read this series in high school and was completely enthralled by it. The choice to explore racism through a fictive twist in the normal ‘white vs black’ dichotomy was fascinating. I can’t wait to rediscover the characters as well. Plus a fourth and final book has come out in the series since I last read the third one so rereading the series will be a good refresher for it.

Into Aether (The Trinity Key Trilogy Book 1): by L.M. Fry

Colorado teen Theodora (Theo) will do anything to find her missing mom, including travel into the hidden and mysterious Victorian subculture of Aether. She takes a ride with airship pirates to a floating island full of strange automatons and even stranger people.
After a century-old feud reignites, she uncovers the alarming truth about her family’s past. Finding her mother is more important than ever.

I finally bit the bullet and signed up for NetGalley! So now I have a ton of books I get to read and review 🙂 This will be my first one and I can’t wait. The steampunk cover caught my eye as did the premise.

I’m not sure if I’ll get to this one before next week, but it’s on my list for the near future. I don’t have high hopes, but I’m compelled to continue the series even if the first one didn’t completely impress.

Well, that’s it for me! Let me know what you’ve been reading or are reading or will be reading in the next week. Or share your WWW Wednesday link and I’ll hop around the blogosphere to share the bibliophile love 🙂

19 thoughts on “WWW Wednesday | The Fourteenth”