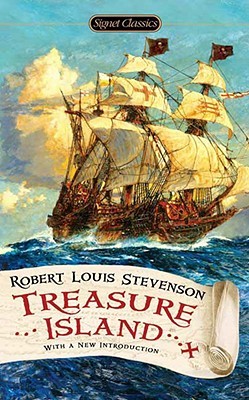 When most people hear the word pirates, the first image that jumps to mind is either good ol’ Jack Sparrow or peg-legged Silver. The former is a result of mass media projection, the latter a result of masterful writing.

It’s been a while since I last read Treasure Island and even then it was an illustrated classic which meant some abridgment to the actual text.  It was an absolute pleasure to read the full version. Stevenson created a masterpiece of an adventure, a true seafaring ride with twists and surprises, moments of honour and displays of dastardly deeds.

The plot is simple, yet effective, every scene well executed with purpose and driven by conflict. It is succinctly told and full of lessons of morality as well as thrilling fight sequences. It really is a well-rounded little book.

Of course, no review can be done of Treasure Island without some discussion of its characters.  Jim Hawkins might be the protagonist of this story, but Long John Silver is the essence of it. His morally ambiguous character  keeps a level of suspense, at times masquerading as Jim’s mentor/protector, at other times as the pirate captain with a desire for treasure. Stevenson created not only one of the most notable pirates in literature, but one of the most memorable fictional characters of all time.

Jim is a great character too, perfectly embodying the coming-of-age protagonist as he is thrown from his comfort zone and made to become a man, learning to fend for himself.

Treasure Island is a classic adventure novel and is easily enjoyable for readers of all ages. If you haven’t yet traveled with the Hispanolia to Treasure Island, then I highly recommend that you book a ticket! It’s one ride you don’t want to miss 😉