It marks the debut of my good friend Sarina Langer’s novel: Rise of the Sparrows!

I am fortunate enough to be hosting her today on the first day of her blog tour. I’ve also had the pleasure to beta read her novel and I assure you it is a superb fantasy novel. I hope the following interview can convince you of the same 🙂

And don’t forget, at the bottom of the page is the chance to win 1 of 5 copies of Sarina’s book!

(note: formatting is weird for some reason, still trying to fix that…)

Now, without further ado, may I present Sarina and her novel Rise of the Sparrows! 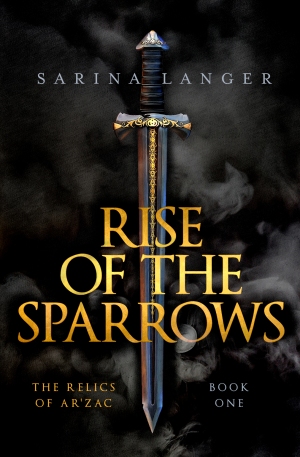 Growing up homeless and orphaned in a town that hates her, Rachael must assassinate the king of Rifarne to become queen to a people who once wanted her dead.

Rifarne is a country opposed to magic. When its people demand harsh action, King Aeric sees himself with no other choice but to outlaw those with the gift. Rachael, who possesses the rare gift of a Seer, soon finds herself with visions of her own violent death. When her escape goes wrong and she ends up in the clutches of a vicious Mist Woman lusting for her blood, she finds she is the only person who can stop the war against people like her – and assassinating the king to take his throne may well be the only way to do just that.

Hi Sarina. Tell us a bit about yourself.
I studied Photography at university, and to the great disappointment of my tutors I work part time in my university’s library now, while writing my books the rest of the time. I have a huge addiction to stationery, and am a momma to one cat – my Sellybean, who has become the mascot to my blog and my writing.
I read a lot of fantasy across all sub genres, but I’m trying to bring in some scifi, too. Besides writing, I play video games of the same genres, I read psychology books for fun, and I neglect my garden a lot more than I should.
You also have a blog. Tell us a bit about what you do there.

My blog is all about my writing. I do have a schedule, but I expect it’ll change a little soon to leave more time for writing.
I share writing prompts and my interpretations, word counts, progress I’ve made (or failed to make), insights into what I do such as my research, my experience with my beta readers, and more recently I’ve also started offering guest posts and interviews.
Rise of the Sparrows is a fantasy novel. Are there any authors in the fantasy genre who particularly influenced your writing?
There are! I’ve been drawn to writing since I was very young, and I’ve always been drawn to books, too. I read a lot of thrillers or mystery novels in my teens, but then stopped reading for a while – say, a year or two. When I finally missed it enough to go looking for a new book to read I found the Godspeaker series by Karen Miller. I loved the cover and I liked that it was a series (more to read if I enjoy it!), so I read the first chapter and was hooked after the first paragraph. I bought the whole series, and it made me want to write.
I’m sure it would have happened sooner or later anyway, but it was her books that made me want to try writing again.
Since then I’ve discovered many amazing fantasy writers, but to list them all would take a while. As a basic rule, I admire all writers whose characters make me feel something, or who inspire me to write.
This is your debut as a published author. Congratulations! How long have you been pursuing this goal for? How does it feel to have achieved it?

Hard to say. My Mum would tell you that I’ve always wanted to write since before I knew the alphabet, but I don’t remember that. She showed me the scribbles I made on the walls when I was a toddler, but I don’t think I can count those 🙂 Which toddler doesn’t try to improve the wallpaper that way?

The first time I took writing seriously I was nine years old, I think (or as seriously as you can when you’re as young as I was). Give or take one, two years. I wrote the whole thing in a notebook, and it was about a girl who had to travel to a magical country (through the base of this huge tree in her garden, naturally) to save her sister from… something. I don’t think I thought that far ahead, but I did go to a lot of effort otherwise. I invented an alphabet – I knew my Mum was very impressed that Tolkien had done it, but she merely smiled (and probably thought ‘aww, there there!’) when I proudly showed her mine – and made sure to describe the garden in great detail for when Hollywood bought it for a huge amount of money. That’s the first time I remember taking it seriously, but I didn’t put much thought into writing for several years after that. I did write a bit here and there, and tried writing thrillers for a while but they never progressed past the first page.

I tried again years later. I was very proud of my first draft, too, but naive kid that I was I thought the first draft was perfect. Apologies to the two agencies who have probably black-listed me. Rest assured, I  burnt it. (Okay, so I didn’t burn it, but I have no idea what I’ve done with the thing.)

I was somewhat disheartened after that, and it took a couple of years before I started writing Rise of the Sparrows. I had to set it aside for a while because I was studying for my degree at the time, but I came back to it and now I’m here! 🙂

So, I guess, this is my third attempt. The amount I’ve learnt since the first try is insane, and I’m not backing down this time.

And you can find Rise of the Sparrows on Amazon or here on Goodreads!

NOW TO THE GIVEAWAY!

It’s being hosted on Rafflecopter, but I can’t post the actual widget here, so you’ll find all the instructions over HERE!

The giveaway ends Saturday so be quick about you and may the force be with you… er, the odds be ever in your favour… er, best of luck 😉

22 thoughts on “Rise of the Sparrow – Sarina Langer | Interview & Giveaway!”