Hope you’re well and enjoying yourselves!

Consider this the first in my attempt to resurrect the book reviews on my blog. I’m trying to bring some order back to the chaos that has recently become my life and fixing some elements on this blog is a major priority.

With that intro, here’s the review… 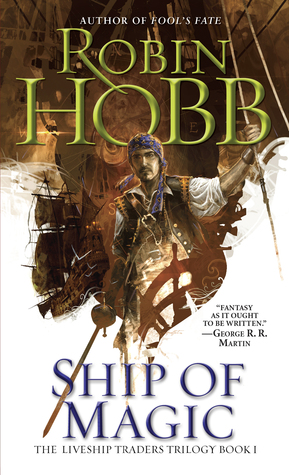 Bingtown is a hub of exotic trade and home to a merchant nobility famed for its liveships, rare vessels carved from wizardwood, which ripens magically into sentient awareness. The fortunes of one of Bingtown’s oldest families rest on the newly awakened liveship Vivacia.

For Althea Vestrit, the ship is her rightful legacy unjustly denied her, a legacy she will risk anything to reclaim. For Althea’s young nephew Wintrow, wrenched from his religious studies and forced to serve aboard ship, Vivacia is a life sentence.

But the fate of the Vestrit family and the ship may ultimately lie in the hands of an outsider. The ruthless pirate Kennit seeks a way to seize power over all the denizens of the Pirate Isles…and the first step of his plan requires him to capture his own liveship and bend it to his will….

Ship of Magic is the first installment in the Liveship Traders trilogy by Robin Hobb. It is the second series set in the Realm of the Elderlings. The narrative unfolds mainly on the high seas and follows the lives of several characters. Their lives are interconnected through Vivacia, a newly awakened liveship. She is one of a few ships who have a consciousness and only her wooden hull truly separates her from the humans who command her. Though part of the setting, Vivacia is as much a character as any of the other’s whose lives are bound to her deck. Though an old ship, she is new to life and throughout the novel struggles to determine her own identity amidst those seeking to define her for themselves.

It’s difficult to sum up the story because there are so many different threads. While the Vivacia remains a common thread throughout, sometimes more implicitly than not, the varying narratives are unique and take different forms. It’s not a criticism. Most of these storylines are compelling.

Kennit makes for an interesting antagonist, revealing at times levels of humanity amidst his general disregard for moral codes. Althea’s struggle to prove her worth sums up the age old struggle of woman vs. patriarchal societies. Wintrow’s growth is most notable throughout, having to come to terms with his new lot in life.

At the same time, some characters felt thrown in with no other purpose then to set up some larger plot for the rest of the series. While the character’s above spend most of the time on the high seas, the book does return every so often to the homeland of Bingtown where Wintrow’s younger sister makes a fool of herself and the politics of the traders becomes embroiled in a new market of slavery.

Judging this book is most difficult, though, because it does not feel like a finished story. That’s not to say that it ends on a cliffhanger; rather, many of the characters’s storylines are left without feeling as if they achieved something. Most notable in this is Althea’s story.

Despite these flaws, I do have to commend Hobb for her mastery of character creations. She has a knack of delivering on round characters who come across as unique beings, never caricatures, and all flawed. I was endeared to many of them and find myself wanting the next book only to discover what happens next.

Of course, the greatest achievement of the book is the premise of the liveships which Hobb delivers on at every turn. Vivacia is definitely one of my favourite characters. There is another liveship who also makes recurring appearances as a character: Paragon. His story is one that affected me the most, really moved me. Beyond that, the magical ramifications of these ships foreshadows a conflict for the rest of the series

Overall, Ship of Magic is a good fantasy novel and one that delves into some interesting themes on morality. If you are one for epic fantasy novels, I would recommend giving it a read. If you’ve never read Robin Hobb, however, I would suggest starting with her first trilogy: The Farseer Trilogy.

5 thoughts on “Book Review | Ship of Magic by Robin Hobb”