this is a re-post from my other blog.

Reading is a bad habit I never want to break.

From a young age, my parents instilled in me a deep love of the written word, a passion that I can’t seem to shake, a passion that’s too good to resist. I make it a habit to bury my nose between the covers of a book in the early morning when I wake and in the late evening before shutting the light–I’ve long outgrown the phenomenon of the flashlight beneath the sheets read, though I’m sorely tempted to something return to it for nostalgia’s sake. Though my chosen settings for novel devouring has changed, the excitement and thrill of discovering new worlds, meeting new people and discovering my own self in the pages remains constant. As I journey through novelty, however, I am always inclined to and often submit to the urge to dive into the weathered pages of an old friend. Through the years, I’ve garnered a myriad of tomes that I delight in re-reading at random junctures, when life becomes too tumultuous and the need for familiarity becomes insatiable. In those moments when I feel overwhelmed, I look to the books of my past, the books that have come to inspire me to become an author in my own right, to comfort me and imbue me with confidence once more.

Here are just a few. Be aware, spoilers inevitably follow: 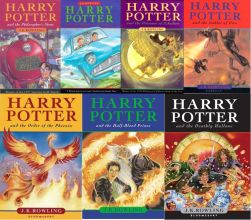 Harry Potter will always top most lists of books that I construct–unless of course it’s a list of novels I regret reading. Why? The easy answer would be to declare its awesomeness as a fantasy story about a boy wizard who attends a school of magic (excuse me, Witchcraft and Wizardry) and has enough adventures to fill the page of seven full-length novels. But that’s only the tip of the iceberg. The real reason Harry tops my list here is because of the juicy subtext that sublimely fits between the lines of words and the well constructed structure that the books uphold. I devoured The Philosopher’s Stone when it was first released, and every other that followed. By the time Order of the Phoenix was released, I had already re-read the first four books at least four times each, and made sure that the fifth was delivered to me by noon so I could have it done before the sun rose again the next day. I have now read each at least fifteen times each and try to read them once a year as a habit. Harry Potter, for me, was a master class in writing a novel series that could hook its reader in without respite, that could take you on a magical journey away from your own life, and into a realm so strange and yet so beautiful. Plus Hermione was the kickass brains of the bunch–girl power! So much of my own writing is inspired to be as well constructed and thematically driven as Rowling demonstrated in her series.

2 – The Westing Game by Ellen Raskin:

This book comes second on the list, but it is a close follow-up. The beauty of this novel is how I stumbled upon it in a Scholastic Catalogue in Elementary School–I don’t know if you remember them. They were the joy of any avid reader at my age, pages of books appropriately suggested for those looking to escape into worlds outside reality. It was in one of these that I first discovered The Westing Game, drawn to it by its premise: Sixteen heirs divided into eight pairs. One inheritance. A mystery to be solved. Only one pair can win. The intrigue it promised was enough to hook me. The cover itself held such an eerie tone that beckoned. Honestly, what wouldn’t you do for a cool $200 million? The love affair only intensified once I delved into the story itself, the plot unfolding without much ado. An easy read, full of heart and grey characters who developed, growing within the pages and on you. Turtle Wexler is a young Nancy Drew-like character whose ability to be herself is her greatest strength. Her intelligence and confidence is fully revealed in a scene near the end that solidifies her as one of favourite protagonists of all-time. The Westing Game is one of the first novels I read that reinforced in my own heart, a wish to create compelling narratives. 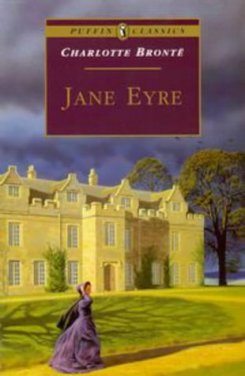 I read Charlotte Bronte before I read Jane Austen. My sister followed the opposite path. And while I adore Pride & Prejudice, my classic go-to novel will always be Jane Eyre. Not only is the gothic atmosphere haunting, but the characters themselves, brooding and lonesome, have captivated me fully. Jane’s relationship with Rochester, a slowly built love based in no terms on appearance, but on kinship, of understanding feels far more real than those written about in Stephanie Meyer’s world–an author I only bring up because Twilight (apparently) draws inspiration from Jane Eyre (my Edward will always be a Rochester, thank you kindly). The mysterious woman who creeps about only adds an extra layer of allure. The reveal that it is not actually Grace Poole nightly haunting the corridors, but Bertha Mason (Rochester’s first wife) was both unexpected and gut-wrenching. The true romantic in me floundered then, and still does now. My obsession with this book, however, does not rely on the romance, but the character of Jane herself who is strong-willed and morally driven. That she chooses to leave Rochester is a devastating move that is well justified. He lied to her, he’s married. That their spirits call to each other by the ending is a beautifully rendered moment that echoes with resonance each time I read through the words, not unlike the way his voice echoes out through the moors. Shivers! The handicraft of this novel is inspiring in its own way and when I am feeling blue and lost, I look to Jane to guide me back to the ruins of my figurative Thornfield Hall to find the life that still lives within.

There are many more novels that deserve to grace this blog, but I’ll merely mention them briefly with a few succinct words:

4 –  Nancy Drew by Carolyn Keene: the young sleuth herself will always be a model for my own life, a role model in no uncertain terms. Dare to Do.

5 – The Sight by David Clement Davies: a truly unforgiving novel about a pack of wolves chased by curses and destiny itself, this book at once traumatized me with its abhorrent number of character deaths while simultaneously provoking a love of the written word with its thoughtful descriptions and allusions to Christian faith. A beautifully written novel for only the stoutest of heart.

6 – The Hobbit & The Lord of the Rings by J.R.R. Tolkein: These novels are the epitome of fantastical narrative and I aspire to write epic tomes that can captivate an audience and introduce a world that lives and breathes to such an extent that it can transport its reader straight into it. This series is one I still indulge in every now and then, especially when recent adaptations fail to capture the magic and whim conveyed through Tolkein’s genius.

7 (And last for sake of sanity…I could easily go on) The Chronicles of Narnia by C.S. Lewis: Perhaps you’ve identified a theme now. I am a great lover of fantasy above all else, if for no other reason than it allows me to escape from reality. Even in my twenties I still consider Narnia a respectable refuge from the storm of my own life. Not only is it rife with Christian allusions, but every page is an exciting page-turner that stays with you long after you’ve succumbed to dreams.

Again, I could go on, but I’ll end this post now with a question. What books do you turn back to now? What childhood tales can still amuse you when the day is dark? What tales can make you cry, make you think, inspire you? What book do you long to huddle with under the covers, with only the beam of a single flashlight too guide you through the pages, the words and into the world beyond?